GDT prices improve across the board

GDT event #291 posted a 4% increase in the price index, on a larger overall offering of 25,093t compared to #290. Powders provided the strongest percentage gains despite the lower involvement of Chinese buyers. Demand was better across the board and the event achieved the rare spectacle of gains in all contracts in all major commodities (except BMP)!

SMP lifted strongly, adding US$222/t or 7.3% on average to US$3,274/t, while the gains were mixed at the supplier level. Chinese buyers stepped back while SE Asia & Oceania more half the sales.

WMP steadied after two months of average price falls, posting a US$139/t or 3.3% gain on average to US$3,691/t. Early-round demand was well above average, with near 1,020t more sold compared to #290. Chinese buyers took the lowest tonnage at this event since 2015 as buyers in SE Asia and Middle East stepped up. 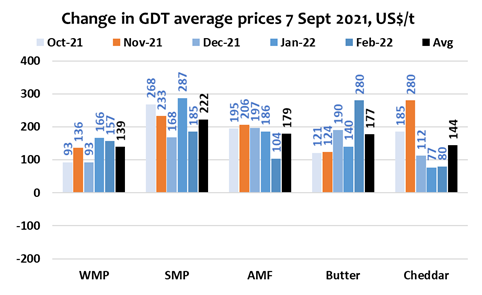